The Casual and Temporary Employees Association of Australia cites the temporary workforce in Australia is currently estimated to include 2.2 million people, which is a staggering 23.9% of the total working population.

Temps provide a very valuable highly flexible workforce.  Many of Australia’s businesses couldn’t operate without them.  They also experience a range of issues that are related to the variable nature of their employment. More Australians than ever are now open to working on a temporary basis.

Contrary to popular belief, work is not limited to entry-level office support roles, professionals at all levels and various sectors are working on a temporary basis.

The Australian Bureau of Statistics estimates there are one million independent contractors, or about 9% of those employed nationally, up from about 980,000 five years ago. Add to those casual employees, who now account for 22.6% of employees, up from 20.8% four years ago.

We are also seeing employers engage temporary workers as a long-term solution to their staffing needs and candidates are making the most of this trend as there are many advantages for them.

Temp worker demand is on the rise

According to ANZ Bank, total advertisements jumped 1.5% to 177,879 in seasonally adjusted terms, leaving them up 12.8% on a year earlier.

Job ads have now increased in each of the past five months, leaving them up 6.5% since the beginning of the year. 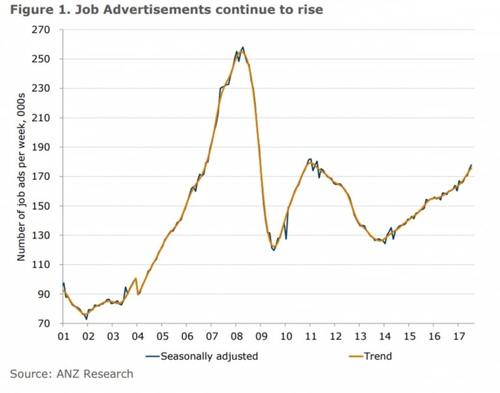 Based on recent analysis from jobs website Seek, much of the job ad increase was likely driven by continued strength in demand for casual workers. The group said that new advertisements for casual workers grew by 17% in the 12 months to June this year, outpacing smaller increases for temp, part-time and full-time workers over the same period of 9%, 6% and 4% respectively.

An impressive pickup in anyone’s language, and one that suggests that recent strengthening in the Australian economy is leading to improved demand for workers.

Employers can hire particular expertise when needed for special projects. Organisations can experience fluctuations in their business activity for a variety of reasons, including seasonal periods, peak production times and unforeseen workloads. So, an added benefit of using temporary workers is that they can be engaged and released at short notice, which can help organisations address challenging times in their business schedules.

Another bonus of using temporary workers is the support they can provide a business’ permanent workforce. Rather than continuously redistributing work between current permanent employees, which can reduce productivity, increase stress and may negatively impact on health and safety, temporary resources can instead support a permanent team and help the productivity of a business.

There is also a reduced administrative burden as temporary workers are paid by a recruitment agency, are fully interviewed and reference checked, and have undertaken any necessary pre-employment medicals, safety checks and OHS training.

Many organisations use temporary workers on a trial basis to test their ability to do the job and assess their compatibility with the organisation. Businesses often want to make sure a potential employee will fit in with the company culture, have the necessary skills for the position, that they want to commit to the role and will enjoy it. This approach reduces the risks involved with any permanent hire, making temporary workers an attractive option for some employers.

It is vital, however, employers make sure the temporary workers they hire are right for the job to ensure productivity and a good cultural fit.

Meet November's Lifesaver of the Month

Mental Health Month: Where to turn when times are tough